This page has the following sections:

Figures 1 and 2 show the results of six cases of subscripting a particular vector that can be defined with:

This particular vector is numeric, but subscripting is the same no matter what type of vector it is. 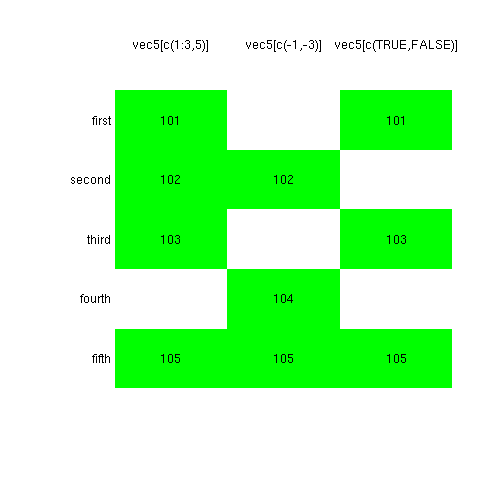 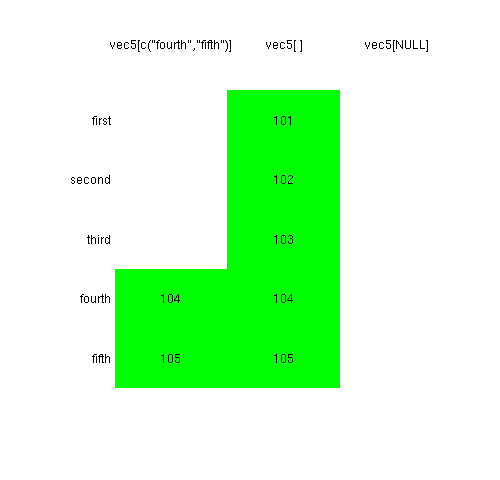 We discuss each of these in more detail.

When you subscript with positive numbers, you are saying which elements you want to keep.

There are two ways in which Figure 1 is misleading for this case:

When you subscript with negative numbers, you are saying which elements you don’t want to keep. The order of elements in the resulting vector is always the same as in the original — there are just some elements gone.

When you subscript with a logical vector, you are selecting the elements that correspond to TRUE. Unlike in Figure 1, this is often something like:

That is, the logical vector doing the subscripting is the same length as the original vector, and it is the result of some comparison operation.

A logical subscript is similar to a negative number subscript. They both leave the elements of the result in the same order as the original with some of the elements not there.

The example in Figure 1 is actually rather weird. Since the subscripting vector is shorter than the original vector, it is replicated to have the same length as the original. Such recycling is either handy or dangerous, depending on the context.

Subscripting with a character vector is just the same as subscripting with positive numbers. The difference is that you are specifying the elements to select using the names of the vector rather than the order within the vector.

This correspondence means that the order of the result need not be the same as in the original, and there can be repeated elements.

If there is no argument inside the square brackets, then all elements of the original vector are selected. This seems silly. But when we get to matrices and data frames, we’ll see that it is actually very useful.

While it might seem like putting NULL inside the square brackets would be the same as putting nothing there, the results couldn’t be more different.

When characters are used as subscripts, this will be referring to the row names or the column names.

If you subscript a matrix so that it has one row or one column, then the result is not a matrix — it is a plain vector. You can ensure that the result is a matrix by adding a drop=FALSE to the subscripting:

You subscript lists just like vectors. Lists are vectors in the sense that counts for subscripting. Subscripting is the same no matter what type of vector it is.

There is another type of subscripting with lists — using double square brackets — that selects one component of the list.

selects the first component of the list. That is different from 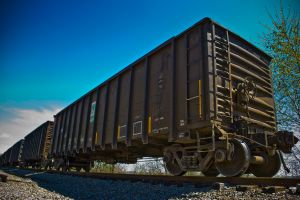 If  a list is a train of boxcars, then train[1] is the first boxcar and train[[1]] is what is inside the first boxcar.  (I’m so jealous that I didn’t think of this analogy.)

The double bracket is going down inside and pulling out a piece. That piece might be a list, but it doesn’t have to be.

A way to remember it is that subscripting with a single bracket can have length greater than one, so the result has to be a list. The result of the double bracket subscripting has whatever mode that particular component of the list has.

The example above gave a hint of another form of subscripting — the use of the $ operator.

The $ operator and the double square bracket are very similar. All of the following are doing the same thing:

The discussion above only talks about extraction. However, if the subscripting is on the left of an assignment, then the values are replaced. That is, the original object has some of its elements modified.

changes vec5 so that 103 is its maximum value.

Matrices are actually a special case of arrays — a matrix is a two dimensional array. An array can have any dimension (that fits on the machine).

When you subscript an array, you need to have as many subscripts as there are dimensions in the array. So you might subscript a three-dimensional array like:

An array (including a matrix) is really just one long vector that has a dim attribute that says how to wrap its values into a higher dimensional shape.

You are free to subscript as if the object were a plain vector.

There is a danger that you can do this accidentally. For example, you might say

when you mean to say

You can subscript an n-dimensional array with a matrix that has n columns. Each row contains the indices in each dimension for the location to be subscripted. The result is a vector with length equal to the number of rows in the subscripting matrix.

In modern versions of R the subscripting matrix can be either positive numbers or character. However, in older versions only numeric subscripting is supported.

Suppose that we have a matrix called Mat and we want the value from a random column for each row. (Why would we want to do that? I don’t know either.) The following command does that:

Circle 8 of The R Inferno contains some ways to be fooled when subscripting.

Back to top level of Impatient R

The train picture is by Mathias25 via stock.xchng