The wings of a programmer

Figure 1: The perceived difficulty of programming. 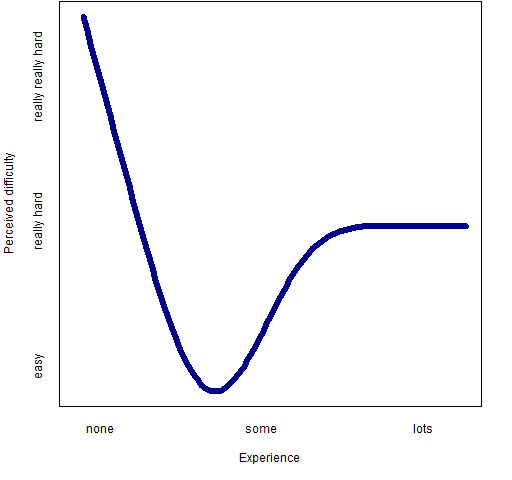 Why is programming so arduous?

There are a few reasons.  Here is one.

These are absolutely at odds with each other.

Do the details, ignore the creativity.

This gets you code that runs, that passes the existing test suite.  But code that is a dead end.  Ask one more thing of it and it falls apart.  The code is likely to be verbose.

Do the creativity, ignore the details.

This gives you code that doesn’t do much of anything (if you get any code at all).

Do details and creativity simultaneously.

Premature optimization is the root of all evil

Simultaneously doing details and design is a form of premature optimization.  Plus, brain rule #4 suggests that trying to do them both at once is, at best, inefficient — gist should come before details.

Better is to use both wings, but — unlike a bird — flap one for a while and then the other.  Not like a bird, more like Paul Bunyan’s dog Sport.  Sport’s back half was sewn on upside down after he was accidentally chopped in half.  This turned out to be a good thing: when he got tired of running on his front legs, he would just flip over and run on his back legs.

First mold your new baby so it fits into the current milieu.  Only once it seems to have a good shape should you worry about it doing everything correctly.  Worry whole hog.

Real programmers know that numbering starts at zero.  Indeed there is failure mode 0, which is:

Don’t program at all.

Tao Te Programming is mostly about the things that make the line in Figure 1 slope back up.  It also suggests additional ways to make programming easier for beginners.

There, upside down (unlike a Bird),

— from “The Sloth” by Theodore Roethke

Figure 1 was produced in R with the function: